Each cue has a number of properties that may be edited:

By convention, every cue in a cue list has a number. Valid cue numbers range from 0 through 999999. Optionally, up to two digits can be used after a decimal point (for example, Cue 1.23).

Once a cue is recorded, it’s number can be changed by entering a new number into this field.

A cue may be given a descriptive name. 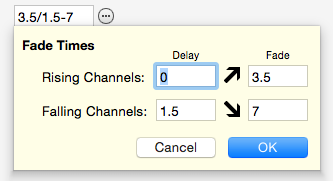 Fade details window.
A normal cue has a fade time (expressed in seconds) that is used to specify how quickly the cue’s channels will crossfade from their previous values to the ones recorded in the cue. Fade times from 0 (no fade) to 86400 seconds (24 hours) may be specified.

) next to the fade field to display a window to enter advanced fade time parameters.

A streaming cue can be set to play back with one of four modes:

Cues have an auto follow timer that begins when the cue is executed, as specified by this field (in seconds). When the timer expires, the playback fader automatically executes a Go to advance to the next cue in the cue list (or whatever cue the current cue is linked to).

This field can be left blank to allow cues to advance in regular numerical order.