The Snapshot tab of the Capture window is used to capture a single snapshot of DMX channels into a cue: 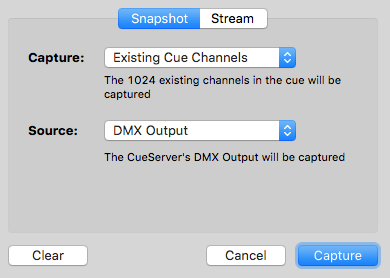 This menu has several options to specify which channels will be recorded into the cue:

This menu has several options to specify the source of the DMX channel values that will be recorded into the cue:

Once the appropriate options have been selected, click on the Capture button to record the current DMX values into the cue. The Capture window will close and the cue will be updated to show the newly captured channels.