When a DMX Trigger is set to the Act on Changes type, any time the incoming DMX value changes, a CueScript action is executed.

This type of trigger is best used to create custom actions that take the input value of a DMX channel and perform some kind of operation upon it. For example, a trigger of this type can output a string via a serial port or by UDP messages that passes the DMX channel value to another device. Another example would be to control a group of channels from the input of a single channel.

When editing an Act on Changes trigger, the editor panel will appear similar to this example: 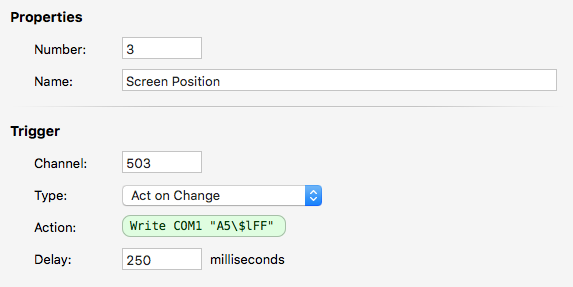 The following properties can be set for an Act on Changes trigger:

*Note: String Substitution Codes can be used to retrieve the DMX value and/or other live information into strings when using this type of DMX Trigger. See the section on Strings for more information.

Controlling Groups
To create a scenario where a group of channels in CueServer is controlled by an input DMX channel, string substitution can be used. First assign a variable to the DMX value, and then use that variable to adjust the level of the group. The CueScript action would be:

Controlling Window Blinds
Popular window blind systems use a RS-232 serial protocol to communicate with the motors. To create a DMX trigger that takes the value of a DMX channel and passes it to the window blind controller, a string such as "FCF0FF<group-address><motor-id>FB<position>FFFF<checksum>" must be sent out the serial port. To do this, the CueScript action would be: